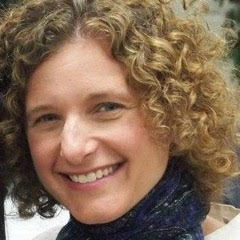 Growing up, we called my synagogue the “ice palace” because it was large, had marble walls, and because the people were cold. Yikes. As you can imagine, after becoming a Bat-Mitzvah, I said I was done with Judaism. So, how did I end up deeply involved in Jewish thought and eventually decide to become a Cantor and later a Rabbi? As a young adult, I was searching high and low for a philosophy, a theology, a guru that made real world sense, that helped me lead a more beautiful and peaceful life, that helped me live in gratitude and be inspired to leave the world better than I found it. My search brought me home. I realized that if I looked at Judaism through a slightly different lens than I was shown in Hebrew school, I didn’t get bogged down in the do’s and don’ts of Judaism but could focus on the “nougat center” of each word of Torah, each tradition and each law. I discovered I already had in the palm of my hand all the beauty I was searching for. I was born Jewish, but as a 30 year old, I chose to live Jewish.

My formal education has been a-typical for sure. It has been pieced together through seminary classes, one-on-one mentoring, synagogue hopping, and reading A LOT of books. The Rabbis, Cantors, writers and teachers who taught me and opened my eyes have been Reform, Renewal, Conservative, Orthodox, even “Zen.” Because of this a-typical education, the lens through which I now see Judaism (and spirituality in general) doesn’t fit under the narrow umbrella of one movement or one teacher. What feels honest and true to me is synthesizing all of these disparate sources. I soaked up incredible lessons from each, found I could apply them to my life, and got excited about sharing those discoveries with others through words and music.

I was a music teacher at Fairfax High School and at Ramona Convent Secondary School. I was a choral conductor at Beth Shir Shalom, and with the University Campus Choir at UCLA. I was the founder and director of the Namaste Women’s Choir. I have also been a singer/songwriter (with an album for children), a Cantor, and most importantly, a mommy. I have a Bachelor’s Degree in Music Education from NYU, a Masters’ Degree in Choral Conducting from Cal State LA, was Invested as Cantor through the American Seminary for Contemporary Judaism, and was ordained as a Rabbi through the Jewish Spiritual Leaders Institute. I am a member of the UJUC (Union of Jewish Universalist Communities). I served as the Cantor/Educator at Shir Hadash and at Beth Shir Shalom, and I am now the spiritual leader of a wonderful new community, Cool Shul (Kehillah Sababah)!