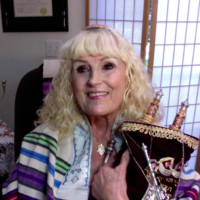 In 1994, Galit accepted the cantorial position at Congregation Sholom of Leisure World in Seal Beach, California, eventually moving into Leisure World, a gated retirement community of 9,000.

It became increasingly clear that the Jewish community of Leisure World needed a rabbi, one who was an integral part of this unique community and so Galit began to explore the possibility of becoming a rabbi. She found the perfect solution through JSLI (Jewish Spiritual Leaders Institute), founded by Rabbi Steve Blane.

Rabbi Blane and JSLI were a perfect fit. Galit could complete the course of study and did not have to leave the community she served. She maintained her position as cantor until 2012, when she was ordained a rabbi through JSLI, and was accepted into the IFR, the International Federation of Rabbis, in 2013.  In 2013, Galit was elected Vice President of the Leisure World Interfaith Council; for the last two years, she has organized the program for the National Day of Prayer for the community.

Rabbi-Cantor Galit continues to be affiliated with JSLI; Sim Shalom, the Online Synagogue; and the newly formed UJUC, the Union of Jewish Universalist Communities.In the spring of 2016, Rabbi Galit formed a new Universalist synagogue in her retirement community.  Beit HaLev, House of the Heart, Inc. is dedicated to reaching those who are unaffiliated, shut-ins and Leisure World residents who are seeking a gentler approach to Judaism.  In addition to bringing services to the sick and those who cannot attend regular services, Beit HaLev conducts livestreamed services on Friday evenings and Saturday mornings, including online Torah services.

R’ Galit: “As a Jewish Universalist, I embrace all branches of Judaism and I welcome all people to worship, no matter their beliefs, to find comfort, joy, peace and love. There is no “one way” to seek God. All paths are open to those who seek them.”
Rabbi-Cantor Galit has not stopped performing. She and her husband and singing partner, formed “Duets & Other Good Stuff;” they perform scenes from Broadway musical theater shows – in costume, changing onstage behind a Shoji screen – including Phantom of the Opera, Oklahoma, Brigadoon and Carousel.