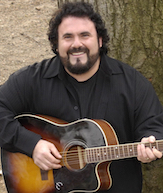 Rabbi, Cantorial Soloist, Educator with an M.Ed, and nationally known recording artist and entertainer, Rabbi Jon Nelson comfortably wears many hats. As the founder of the groundbreaking, Jewish Rock Band, “Yom Hadash”, he’s had the privilege of spreading his welcoming and inclusive brand of Jewish music across the country for close to two decades, performing over 1,000 concerts for audiences of all ages. In addition to appearing on several nationally distributed original CDs and music compilations, Rabbi Jon has released ten original CDs, with music that crosses genres and boundaries.

A proud native of New Bedford, MA, Rabbi Jon graduated from UMASS Amherst, has a Masters Degree in Education from Cambridge College, and is a proud alumni of JSLI where he received his Rabbinic Ordination.

Rabbi Jon lives in Massachusetts with his wife Beth, their kids Ben, Evan and Emily, and their “Brisket” the dog. In addition to touring with his band and officiating at life cycle events across the country, he also sings at worship services and heads up the music program at Temple Emanu-El in Marblehead, MA.